Posted by DangerousMind at 09:48 No comments:

Only known Interview with Lung Leg

Only known Interview with Lung Leg 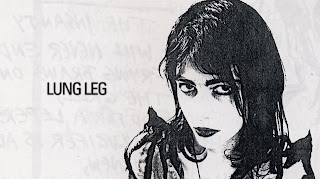 Duane Davis: How did you first get involved with acting/filmmaking?
Lung Leg: I was studying film and video in New York. I started hanging out with Nick Zedd and Richard Kern. Kern needed someone for one of his films… so I decided to take a stab at acting. I named myself Lung Leg. The Word ‘Lung’ in Chinese means ‘Dragon’; the word ‘hand-lung’ in German means ‘to act’

DD: Acting in a film or making a film is often a matter of control; and the body of the actor is the site of that control. When you were acting in Kern’s films, the role you took was often that of the victim: What control was exercised over you by the director, the script, the other actors and finally, yourself, your own view of the script or situation and what is demanded?
LL: The films are essentially Richard’s Expression. A lot of the ideas were mine, of course, but the spirit is Richard Kern’s. I played only one role as Victim… in Fingered… I was really taken for a ride in this movie… Unfortunately there was no script, if I had seen the script I wouldn’t have had anything to do with it. Half way through the film I realized, this woman, Lunch is not making a film, Lunch is playing some kind of bored game; with me and the other people involved… manoeuvring… manipulating… etc… and for that reason I would never want to work with her again. She is abusing the medium. She obviously tried to make me appear ugly so I wouldn’t get her boys, and in doing so reduced greatly the quality of the film. Richard’s other films were based upon his theories of compromise with all the people involved.

DD: In making your own films, do you start with an idea or situation that you want to explore? Do you think of film as a structure of images rather than narrative of words and verbal exchanges?
LL: The structure often appears to me as dreams… and I chose from a variety of variables a deliberate symbolism. I use, at times combinations of four languages in my scripts which at times form a magical dialogue similar to a forgotten angelic language. I have been experimenting with semi-precious stones to produce a filter that will create magically beautiful film. I have written three films but as yet have not been able to finance them. These films are based upon lines… lines after lines… lines of crank… lines of meth… lines of X. Finding interesting lines to do… is a most pleasurous way of life.

DD: What is the relation between your own life and the roles you have performed in films? How much do you draw from your own experiences in creating a role? In creating a film? Are the films a way of acting out or exorcising the violence, whether physical, mental or emotional, that has been done to you in your everyday life?
LL: I don’t in any way live an ordinary life. I think it is horrible to put what is od minuscule importance to others to watch, no, people waste too much time as it is watching one another dribble, of course, you should use the most meaningful symbols you can find, and bleed over them before the shoot. What I have done to others, this is what is of contriversial importance to the gods who have saught me out to torture and punish.

DD: What is your background, Family, education, who were your friends your enemies etc?
LL: Well my background was stable… I mean there was a stable on the ground out back. My father holds the national record for the decathlon. But people are always asking me that, about my parents, about my upbringing; about my psychology. To clarify things for the worst, I’ll have you know that I think psychology is a load of Horse manure… Trodding down a road… that leads to nowhere… a dead end… the wrong way to go… when there is no place left to turn… damn, right, ‘cause before you know it… we’ve all jumped on the bandwagon that leads straight to the funny farm… a mighty weird place to grow (up)? The FunKnee Farm… Where a Hardon is just a funny bone, and no one is laughing. Where they find patients… waiting for the cows to come Home. And they never get home. The Funny Farm, for people who are too chicken, where everybody wants to leave, where the money grows on trees, and there out there raking It in. The Funny Farm, Where what the grow is corns on their feet, And the ears of corn are listening. The Blacks are out looking for their roots. And the Plants are factories. The Funny Farm, it’s like a sick joke, and everyone dies laughing.

*NO COPYRIGHT INFRINGEMENT INTENDED*
*I DO NOT OWN THIS*
*FOR EDUCATIONAL PURPOSES ONLY*
Posted by DangerousMind at 03:35 4 comments:

"Its not often these days you come across a movie that truly has the spirit of independent cinema at its core,when the latter does occur however,its a pretty god darn momentous event!
I had this 'epihany moment' when I first read the script for indie horror film -cum- musical Spidarlings.
The film centres around two outsiders,a punk girl and her sassy lover Matilda as they skirt eviction,vicious psycho paths and embrace spiders...and thats just for starters!I knew i had to be in this film,it struck me as completely unique and i loved its black humour and delightful smatterings of old school gore!" - Sophia Disgrace

Grindhouse Horrors: Tell us a little about this film?
Salem Kapsaski: Spidarlings is Horror Musical centred around a young lesbian couple who are trying to make ends meet while being terrorized by their landlord for not paying the rent.
I wanted it to feel like the sequel to a great punk rock love story, my own Sid and Nancy only instead of dying they moved to Kent and try to scam the dole.

GH: What horror movies influenced Spidarlings?
SK: It's hard to say, while Horror is one of my favourite genres I think it's "Daisies" and "Liquid Sky" that were probably the biggest inspirations, as well as the films of John Waters, George Kuchar and Richard Kern.

GH: What made you get into film making?
SK: When I was seven years old my grandfather took me to see "Full Metal Jacket"; that film had a huge impact on my life in terms of me wanting to be involved in Film-making. It was also my grandfather who bought me my first video camera when I was nine.

GH: Getting to the f/x is Spidarlings cgi, or old school props?
SK: Old school props, most of them are constructed in my kitchen.

GH: When is this movie going to be available the public?
SK: We hope to be done with Post-Production by the end of the summer and hit the festival circuit next year.

GH: Do you think we will have another Golden age of Horror?
SK: There have been many fantastic independent horror films over the past few years, even if a lot of the films have not received the attention or acclaim they truly deserve.
I don't think however that the next golden age will come out of Hollywood or Britain. There have been quite a number of great French Horror films in the past few years.

GH: Any movies you see make you want to stab your eyes out lately?
SK: Not since a friend of mine insisted that I watch all six "Star Wars" movies with him.

GH: Do you think Joss Whedon will ever get his sanity back, or is it lost in the Whedonverse?
SK: Joss Whedon's sanity or contributions to the arts never interested me, so I don't really know.

Originally published by
©2012 Dan Cook
Grindhouse Horrors
Posted by DangerousMind at 02:35 No comments: